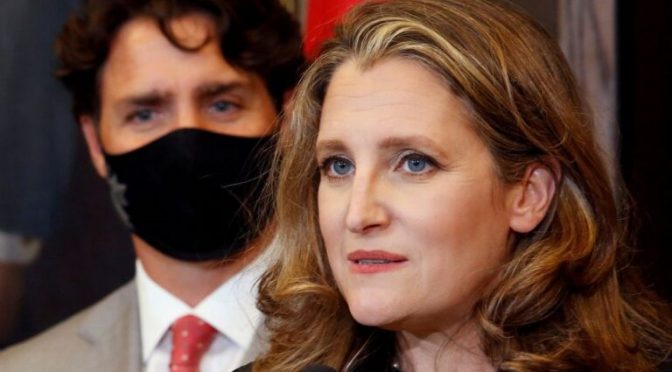 My friend sent the following to me:

Read the this article. Trudeau and Freeland seriously screwed up the Canadian Banking System when they announced and subsequently bragged about freezing bank accounts and going after associated crypto accounts. You can’t do this type of action unless there is co ordination of all world banking systems or one world bank. Cash is being withdrawn and it’s probably continuing.. most likely, they got a rude awakening and even scolded privately by international bankers, WEF, IMF etc. They created a contagion of non confidence in banking that has probably spread to banking systems throughout the world. They seriously damaged the plans for implementation of digital IDs worldwide by freezing accounts arbitrarily.. bank runs in Canada will probably continue.. Watch out.. gold and silver will go through the roof.

A Major Backfire – Is the Canadian Financial and Banking System in Serious Trouble as a Result of Their Attack on Private Bank Accounts?

I do not know how serious this is going to be.  But I can tell you this:

A TD bank employee mentioned that her superior talked about the problems with Trudeau’s action in freezing bank accounts.  My contact at TD Wealth Management told me that there are talks of some people cashing out.

Why did they have outages? Was it due to a high traffic of customers withdrawing cash?

If you understand how banking works, which is based on fractional banking, 100% of the depositors need to withdraw only 10% of their money and there will be a bank run and banks will be in serious trouble.

Yesterday, my neighbour told me that two of his friends were donors to the Freedom Convoy at GiveSendGo and were doxed by the criminal hacker.  One of his friends had to contact the bank every time he wanted to use his credit card.  I can almost guarantee you that every donor to GiveSendGo will be withdrawing 10% or more of their money, now that their bank accounts are unfrozen.  However, 10% of Canadians did not donate to GiveSendGo.  But a percentage of Canadians and foreigners, who did not donate, will withdraw some money from the banks, just in case the government freezes their accounts for another reason.

Then there is negative media coverage from outside Canada:

U.S. venture capitalist David Sacks is the founding COO of PayPal. In a write-up for Common Sense, a newsletter curated by former New York Times columnist Bari Weiss, Sacks warned that Canada’s “dystopian” usage of the Emergencies Act to freeze bank accounts without oversight could be a preview of coming attractions for the United States. “It’s a Western version of China’s social credit system that does not altogether prohibit political dissent but makes it so costly that it becomes impractical to the ordinary citizen,” he wrote.

Matt Taibbi, the political columnist for Rolling Stone, wrote on his Substack that Canada was on the fast track to “bureaucratic dystopia.” Titling the column “when boring people turn dangerous” he took particular aim at Canadian Finance Minister Chrystia Freeland who, like Taibbi, was an expat journalist in 1990s Russia. Decrying the “sci-fi” dystopianism of her Emergencies Act orders against the financial system, Taibbi repeated an anti-Freeland slam coined by one of her former foreign correspondent contemporaries:  “The Nurse Ratched of the New World Order.”

The New York Times was one of the more surprising foreign publications to throw in their lot with the truckers – or at least, the truckers’ right to protest. “We disagree with the protesters’ cause, but they have a right to be noisy and even disruptive,” wrote the Times editorial board. As a publication whose reporters are constantly at the front lines of demonstrations around the world, the Times also threw cold water on the notion that a few thousand truckers were somehow a threat to Canadian democracy. “By the standards of mass protests around the world, the ‘Freedom Convoy’ snarling Downtown Ottawa ranks as a nuisance,” they wrote.

Will Americans, Asians or Europeans hesitate to invest in Canada, for fear of not being able to get their money out? Most likely, a percentage of them will.

There is definitely a hit to the confidence of the Canadian government and Canadian banks.

The financial sector is the biggest sector in Canada and the TSX.  (The biggest sector in the U.S. is technology.)  The banks are instrumental to a healthy economy.  Businesses need financing to fund growth or maintain existing operations.  Consumers need financing to spend on homes and merchandise.  If there is an impediment on this, it will affect the economy.  Therefore, this is bearish on Canadian stocks. Diversifying your investments away from Canada would be very prudent right now.